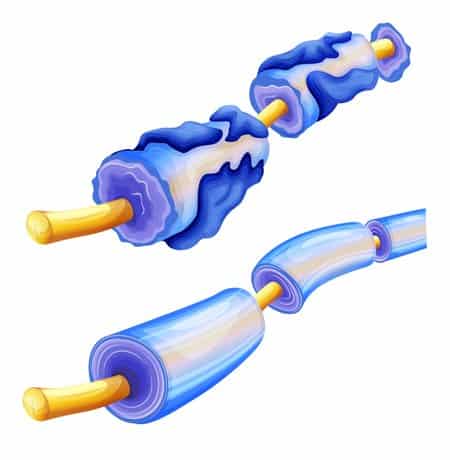 Could Mold Be A Possible Cause Of Multiple Sclerosis?

Research into the impact of mold on heath is growing for three key reasons.

First, the Internet has enabled individuals that have suffered from mold illness to publicize and create awareness.

Second, contractor and environmental experts have long suspected that mold has a negative impact on health.

Finally, research studies and medical tests are demonstrating a positive link between mold and illness.

One of the missions of Valor Mold is to provide information and knowledge about mold and other indoor air quality issues to consumers and business owners in the Washington DC area.

To date, we have explored the link between mold and asthma, sinusitis, parkinson’s disease, and chronic fatigue syndrome.

The purpose of this article is to explore what impact mold can have on the myelin sheath, whose degeneration leads to Multiple Sclerosis (MS).

What Is Multiple Sclerosis?

Each year in the United States, about 10,400 new cases are diagnosed, averaging out to 200 new cases per week.

The body’s nerves are protected by an insulating coating around the nerve cells called the myelin sheath. Myelin is a fatty substance that insulates the nerves, helping them send electrical signals that control movement, speech, and other functions.

MS is caused by the degeneration of the myelin sheath. When this occurs, nerve messages are not transmitted properly.

The term “sclerosis” refers to scarring because patients with MS develop multiple areas of scar tissue where their nerves are damaged.

Since MS is a chronic inflammatory autoimmune disease of the central nervous system, it affects the patients brain, spinal cord and the eyes’ optic nerves resulting in problems with muscle control, balance, vision, or speech.

Top 10 Stats and Facts About MS!

The exact cause of MS is not known. However there are several theories:

Some researchers believe that genetics are a factor:

Research on the genetic link, however, is not conclusive and has not yet proven that this is a inherited disorder, meaning that if one of your relatives has MS you will not necessarily get it.

Another theory about MS is that if someone has a genetic predisposition to MS, viruses could trigger the disease. This is the reason, researchers are studying the relationship between MS and infections such as Epstein-Barr, herpes, and varicella-zoster.

Some researchers also believe that people with other autoimmune diseases like type 1 diabetes, thyroid disease, or inflammatory bowel disease, are at a slightly increased risk of developing MS.

What is going on here is something presumably that is preventable….We just need to find out what it is in the environment. Because it has to be in the environment: your genes don’t change over two generations, three generations. (George Ebers, a professor of neurology at the University of Oxford, commenting on his study on the rising incidence of women with MS)

Research on the environmental causes of MS is growing primarily because the incidence of MS is significantly higher in colder climates, common in Europe, the United States, and Canada compared to people living in Asia and the tropics.

New Zealand and parts of Australia also have higher rates of MS, but these are relatively temperate climates. For this reason, some researchers believe that cases of MS increase in incidence and prevalence farther from the equator (or in higher latitudes).

In the United States, the rates of MS are nearly 100% more in the northern states compared to the southern states:

Why is MS nearly 100% higher in the northern states?

MS Could Be Caused By Vitamin D Deficiencies

Vitamin D is naturally produced by the body in response to sunlight.

People living in the northern states spend more time indoors because of the cold weather, getting less sunlight.

Researchers speculate that this leads to vitamin D deficiencies, weakening the immune system, increasing the risk of getting MS.

Another possible explanation for the higher prevalence of MS in colder climates could be mold because people in colder climates spend more time indoors, making them more susceptible to illnesses caused by indoor air quality issues.

Could Patients Diagnosed With MS Actually Be Sick From Mold?

“Three out of four Americans who naturally produce antibodies to mold toxins can live and work in water-damaged buildings without suffering significant demise in their health. But patients who carry the HLA gene have no antibodies to deactivate and remove mold toxins. They develop excessive accumulation of these harmful toxins. Mold toxins are lipophilic, meaning their molecular structure consists of fatty acid molecules. For this reason, mold toxins migrate to and deposit in the brain because the brain is the ‘fattiest’ organ, consisting of 60% fat….Mold toxins destroy the myelin sheath on brain neurons, causing the classic white spots seen in MS. “(Dr. Rick Sponaugle of the Florida Detox & Wellness Institute)

As stated earlier, MS is caused by the degeneration of the myelin sheath. The current theory: MS is a chronic inflammatory autoimmune disease of the central nervous system because the body attacks the myelin sheath. Symptoms of MS include the following:

Similarly, individuals with a genetic susceptibility to mold illness that suffer from CIRS, have many of the same symptoms exhibited by those suffering from MS.

Long term exposure to Stachybotrys or Chaetomium, can destroy the myelin sheath that causes many of the same symptoms that MS victims have.

There is no cure for MS and much of the treatment focuses on the use of medications. Considering the similarity in symptoms exhibited by MS patients and those suffering from toxic mold and the fact that mold can also destroy the myelin sheath, the key question that must be answered:

What percentage of those diagnosed with MS are actually suffering from toxic mold exposure?

Considering the potential implications of this question and the long term health costs of treating MS to just control it, it makes logical sense for anyone diagnosed with MS to seriously investigate the indoor air quality of their home and work place.

If mold is found, then find out if you have a genetic susceptibility to mold illness and seek proper treatment to detox your body and properly remediate your home to restore the fungal ecology to healthy levels.

Tags: Could Mold Be A Possible Cause Of Multiple Sclerosis Does Mold Impact The Myelin Sheath